Chart of the Every Other Tuesday: Do Americans want to work?

The US economy just added another 156,000 jobs this past December. By some estimates, the US economy has been pretty successful at job creation in the past five years: the Bureau of Labor Statistics notes that an average of just under 200,000 jobs per month have been created since January 2011.

But a deeper look at the data suggests that we might not want them. 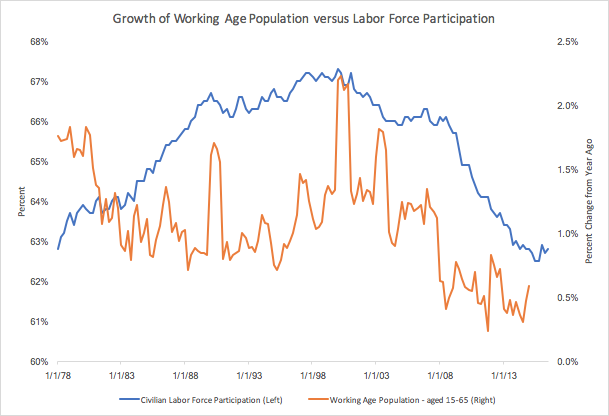 Total labor force participation peaked in the first quarter of the year 2000, and has been declining ever since. Coincidentally, the working age population experienced its highest growth rate that year as well – spiking at a growth rate greater than 2%.

A dramatic decrease in the growth rate of the working population can be seen starting in 2008 – near the beginning of the Great Recession – as it drops to half of its historical rate. However, the fact that the decrease happens that year may be coincidental, as Baby Boomers started to exit the work force in 2010.

But the compiled workforce trend may hide the overall desire to not work. 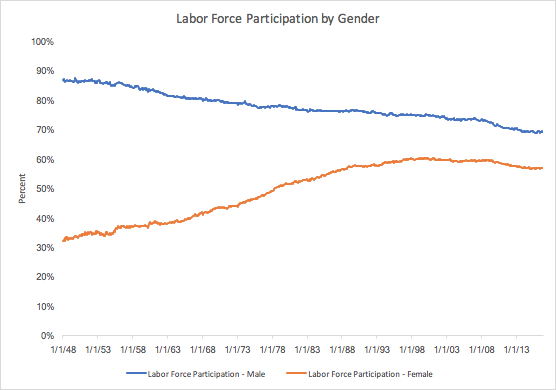 There are a lot of explanations for why the labor force participation rate is decreasing. Optimists point out that the measuring stick has changed; there are many more 15-24 year olds that are still in school, while pessimists are likely to suggest that technology and foreign workers are removing jobs from the economy and that wage growth is stagnant.

The rate of growth in the working population is now at about half a percent per year, while the population of the United States is growing at about 0.75% per year. The overall proportion of working males and females is also shrinking, and the total work force participation is now at levels last seen when Gerald Ford was President.

Whatever the reasons, today’s employment paradigm is novel, and it is difficult to extrapolate a future reality from past data. As President Ford reportedly once said, “Things are more like they are now than they have ever been.”

Chart of the Every Other Tuesday – American Hysteresis