Lending Club released their third quarter earnings report this past Monday, and announced earnings of \$112.6M and a net adjusted loss of \$15.6M

Happily, our note that “the timing of this earnings release … makes us think that the company expects the market to act positively” proved to be correct. The earnings were surprising not only for us, but Wall Street as well. The stock closed 13% higher on Monday following hearing the news that the company beat earnings estimates by \$0.03 per share.

It looks as if the company’s course is being deftly maneuvered while gearing for the resumption of higher origination growth in 2017.

Lending Club proved they could align expenses and revenue

Lending Club did a very good job in cutting expenses in the third quarter. Sales and Marketing were cut by 10.6% (\$5.1M), Origination and servicing expenses were cut by 23.3% (\$4.6M), and even Engineering was cut by 3.4% (\$0.67M). In total, the company slashed \$10.5M in company expenses in these categories. If the company didn’t need to spend \$25M in auditing, compliance, and legal costs this quarter, Lending Club would have been profitable.

When comparing Marketing and Servicing costs with revenue, two interesting things pop out (we removed the \$11M in contra-revenue to provide a fairer assessment between quarters):

It should be noted that the company was not forced to make cuts in its fixed costs, as Lending Club still has approximately \$800 million in available cash. But the efficiency and quickness on cutting overhead shows that this Fintech company is able and willing to drastically cut expenses in a challenging business environment. This is something to keep in mind if you believe that this economic cycle is ending.

That Lending Club chose to keep investing nearly \$20M (adjusted) per quarter into its technology arm signals a commitment to the creation of better underwriting, as well as the creation of new products and technology.

On the earnings call, Scott Sanborn was coyly quiet about why the company was spending so much on product development, when the rest of the company expenses were cut hard. He also stated that the company was working as hard as they could on automating everything possible, and that ‘loan servicing costs could go way down’ as a result. We would bet that there is something brewing in the company’s product development team, and make a wild guess that something big will launch at Lendit USA 2017 next spring.

Mega Investors are of Increasing Importance

In our past article, we predicted that originations looked to be down 20%, and based our revenue and earnings projections on this calculation. Indeed, redemptions for Lending Club’s \$900M hedge fund now represent 65% of the total fund assets (\$588.2 M), aggregate retail investment decreased by 20%, and banks cut their investments by half.

Our prediction was almost right, except for one big missed detail: LENDX.

On the call and in the slides, Lending Club stated that “all large investors have reengaged on the platform.” As seen in the chart below, it does appear that these investors have reengaged. But what wasn’t highlighted is that a single institutional investor made up \$440M of the \$1.4B standard loan program originations. This hulking giant of an investor was Stoneridge Capital’s new closed-ended mutual fund, LENDX.

The fund began deploying its in capital this past June. Although six lending platforms got a piece of the \$1.5B pie (interestingly, Prosper Marketplace was not one of them), Lending Club was by far the most advantaged company as more than \$700M has flowed its way since June. 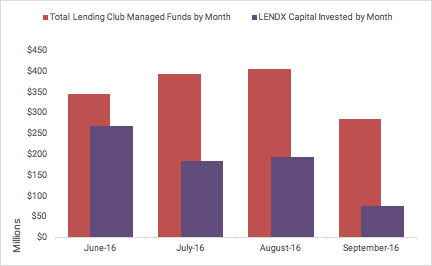 As seen here, LENDX was key to Lending Club’s second and third quarter earnings. In June, LENDX represented 77% of Managed Funds originations, 46% in July and August, and 27% in September. According to LENDX’s semi-annual report, these loans were purchased at par and did not participate in Lending Club’s investor incentive program. This means that LENDX singlehandedly accounted for a significant portion of Lending Club’s third quarter revenue.

This was great news for the platform. The better news is that funds brought in by LENDX is sticky, and due to a predictable cash flow of principal and interest payments, LENDX can be counted on to reinvest about \$70M into new originations each quarter for the foreseeable future. The bad news is all the initial capital has now been invested, and that Lending Club will need to find another large institution to fuel origination growth.

There is one more closed end mutual fund that it is important to keep an eye on, RiverNorth’s RMPLX, which launched in late August of this year and has so far raised \$15M to primarily invest in unsecured consumer loans. The growth and success of this fund will mean great things for Lending Club, especially if additional investment managers observe the success of these two funds and additional ’40 act funds are created in response.

In addition to the ’40 act funds, both of which started their registration paperwork pre-crisis in mid 2015, more large investors are on the horizon. Lending Club’s Chief Capital Officer Patrick Dunne has shown his industry expertise and, in the midst of significant headwinds, lined up a deal worth \$1.3B in originations with Credigy, a subsidiary of the National Bank of Canada, which will be deployed over the course of the next twelve months. Even more impressive is that this deal was at ‘near market prices,’ meaning Lending Club won’t be giving much of a discount to the bank. This move may well inspire confidence in Lending Club’s underwriting, and we could very well see additional banks committing additional capital to the platform. Lending Club announced that they intend banks to represent 25% of capital in 2017. Some back-of-the-envelope math shows that, assuming additional banks reengage on the platform at their former levels, Lending Club is targeting \$10-\$14B in originations next year.

Look for Mr. Dunne’s team of experienced industry professionals to line up more deals with large institutions in the first quarter of 2017.

The third quarter proved to investors that their new executives are effective, and that the Lending Club business model works: by drastically cutting expenses, Lending Club nearly moved back into the black. The company also showed which direction growth would come from. Instead of individual investors, Lending Club will be targeting very large banks and funds. It does make sense to target banks, as there is currently more than \$2T in excess bank reserves, just sitting idle and not earning a significant yield.

The company warned of further losses in the fourth quarter, even though revenue will be higher. The company guided investors to expect an increase in sales and marketing expenses, as well as about \$25M in additional stock compensation. Luckily, the fourth quarter should also be the last quarter of exorbitant compliance and legal costs.

Unless something big comes up, Lending Club will be resuming origination growth, and hopefully profitability, in early 2017.