The main offices of both Lending Club and Uber may be mere blocks away from each other in San Francisco, but the modus operandi of the two tech companies are worlds apart. Uber has expanded hyper-aggressively, consciously making the decision to sacrifice rule-following for the sake of growth. Meanwhile Lending Club has, for the most part, eschewed the typical Silicon Valley mantra of ‘move fast and break things’ for a more conciliatory approach.

Examples of this are shown by each company’s reaction to similar challenges. In turn, these reactions reflect each company’s corporate culture and helps predict future growth prospects.

Both Lending Club and Uber quickly became ‘unicorns‘. And from late 2011 to early 2014 venture capitalists valued both roughly equivalently. Lending Club went public in late 2014 to much fanfare. 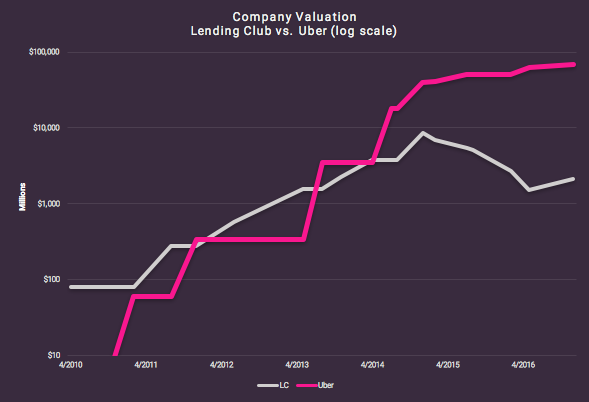 Parity of valuation was short lived, however, and Lending Club’s valuation has declined by 75% from its peak of just over \$10B in late 2014. Meanwhile, although still private, Uber’s valuation has continued to soar, and the company is now considered to be the most valuable startup in the world.

While both are sharing economy companies, it may not seem like Lending Club and Uber have much in common. One deals in financial technology, the other deals with transportation technology. But there are many similarities between the two companies:

A main tenant of investment is that one should earn a higher return for taking on more risk. Similarly, the methodology of how a company approaches a challenging situation can be indicative of their corporate culture towards risk, reward, and growth. Although both Lending Club and Uber have faced similar challenges, the decisions each has made reflects corporate risk tolerance, which in turn affects the expected revenue growth. Some of the comparable challenges include:

Besides an early race against Prosper to be registered in more states, Lending Club has not been aggressive (at least publicly) in battling other online origination companies. Lending Club has only made one strategic purchase, and has largely focused on growing the market for online loan origination rather than antagonizing competing platforms. In fact, in early 2016 Lending Club announced it was helping to create the Marketplace Lending Association as a method to collaborate with existing alternative lending firms.

Avoiding direct competition has eroded the company’s market share, which was once close to 80% of the market in 2012, but has since fallen to 45%. This cooperation seems to have limited the number of markets Lending Club has entered. However, the online lending market as a whole has grown since its inception, which can continue to lift company revenues (a rising sea lifts all boats).

In contrast, Uber is battling under the network effect assumption, where it is a winner-take-all scenario. Uber began seriously battling its competitors in 2012 with the introduction of UberX, which some speculate was a direct counter to Lyft. Since that time, Uber has spent billions of dollars researching and battling its competitors, including spamming competing rideshare companies with fake rides, tracking competing car-sharing drivers , buying data on unsubscribers , and fighting for marketshare in China. This strategy seems to be working: in the United States, Uber’s actions have resulted in a commanding 80%+ market share.

Lending Club’s early messages were about battling against the inefficient banking sector, and allowing investors to invest directly in consumers. They touted higher levels of borrower satisfaction, and a simpler and cheaper option than one could obtain by visiting a bank. Since then, Lending Club has taken a more conciliatory route by partnering with banks to both offer small consumer loans and for access to capital.

Uber has taken the hard approach when it comes to battling the incumbent taxi companies around the world. In fact, the company is fairly (in)famous for it, fighting small PR wars across the globe against both taxis and local government.

Lending Club laid out a product roadmap at Lendit 2013. On their product roadmap, Lending Club listed Business Loans, Student Loans, Insurance, Mortgages, and Credit cards as areas it wanted to launch new products. In addition, it appears that the company planned to eventually expand internationally.

While Lending Club did expand into small business loans (and dabbled in student loans) through the acquisitions of Springstone, it failed to capture leading market positions. Sofi has taken the lead in education loans, while OnDeck and Funding Circle, and Square have captured a large portion of the small business loan category. Plans for real estate, insurance, and credit card loans, as well as international expansion of their core consumer credit market, have yet to materialize despite being on the roadmap for almost five years.

Uber has taken the track of aggressive expansion regardless of the short term cost, and, as a result, now has operations in more than 580 cities worldwide and expansion into complimentary product lines, such as UberEats (food delivery) and UberRush (a courier service). Uber’s most aggressive campaign was waged in China, where the company spent more than a billion dollars in order to achieve market share.

Not only this, but unlike Lending Club, Uber has announced ambitious moonshot projects, like UberElevate (a flying car service) and autonomous vehicles.

In early 2008, Lending Club went on a voluntary quiet period while they registered with the SEC. This is in contrast to their competitor, Prosper Marketplace, who fought (and lost) for the right not to register their loans as securities. Since that time, Lending Club has had a history of following the established rules, and adapting how they operate when they run into legal trouble. This is evident when the SEC and DOJ investigated Lending Club following the CEO’s departure on May 9th, 2016, to no effect (although the company spent tens of millions of dollars upgrading their compliance controls following the crisis).

Arguably, Uber faces considerably more, and increasing, regulation than Lending Club. Uber has embodied the Silicon Valley mindset of “move fast and break things,” and often has a habit of seeking forgiveness rather than permission. Examples are tricking regulators with a fake app , ignoring California rules on self-driving cars, and fighting a proposed cap on the number of drivers in New York City.

Uber has also taken an aggressive regulation mindset to the extreme, and even secretly broke Apple’s terms of use for applications by fingerprinting iPhones (which allows for the tracking of a particular phone even after it has been wiped). The company reportedly did so in order to combat fraud . But because Apple’s app store is the gateway to which Uber serves both drivers and riders, it gambled heavily in violating Apple’s terms of use.

Early in Lending Club’s growth, the former CEO Renaud Leplanche took out loans from the company in order to boost origination numbers. The founder also failed to disclose to the entire board that he had invested company money in another company to buy Lending Club notes, which represented a conflict of interest. Possibly due to these instances that came to light in early 2016, Renaud Leplanche stepped down from being CEO, although no formal action has been taken against Mr. Leplanche.

The CEO of Uber has also had trouble of late. He had a an argument with an Uber driver that was shared publicly , controversially joined President Trump’s advisory team, and supposedly helped create a culture of sexism in the Uber office space .

Some in the media recently opined that Mr. Kalanick should step down. As of now, Uber’s board continues to stand behind him. From the LA times:

It’s clear both Uber and the whole ride-sharing industry would not be where we are today without Travis,” Huffington said in response to a question about whether Uber’s board of directors would consider asking Kalanick to step down, given the bumpy road down which he has led the company.

From Huffington’s response, it is evident that Uber’s VC backers (or at least the board members) are comfortable with the idea that it takes an unusual CEO to build a high-growth company, even if he throws shade in the process.

The decision to go Public

Venture Capitalists decided to cash out in 2014, as Lending Club was downgraded from a mythical (but increasingly common) Silicon Valley beast into a very real publicly listed company. During its IPO, LC was able to raise enough capital (about \$850M) from the markets to continue to operate despite many consecutive quarters of losses. In fact, although Lending Club hasn’t turned a profit in the past year, the company still possessed \$803M in cash and cash equivalents at the end of 2016. Now that Lending Club’s top management has guided expectations to increasing revenue by the end of 2017, the question turns to what (if anything) Lending Club has planned for the cash.

The big question for Uber is, if they went public, how would the market value the company? Kalanick has said that he wants to wait as long as possible for Uber’s IPO, in order to give the company more time to grow. But it is also clear that the VC’s who back the firm only have an incentive to cash out if the market will value the company more than they have. This means that later investors may lose out if the company goes public too early and the IPO flops. Further, a bad IPO would mean that its days of revolutionizing transportation with dreams of flying cars and autonomous taxis would have to go out the window, as they struggle to protect their available cash and be profitable.

What the future will bring

Lending Club’s history of cautious compliance has meant that revenue has grown at a consistent, but slower, pace than Uber. In fact, besides the setback in May of 2016, Lending Club’s revenue growth has been remarkably consistent. Uber’s more aggressive approach to growth and compliance has resulted in a much steeper growth slope. But can its revenue growth be sustained? 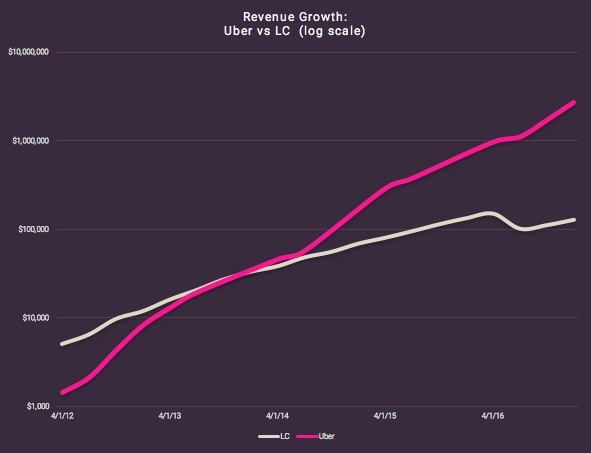 For the most part, Lending Club has acted like a mature company since it went public. Its days of ‘disruption’ may be over (which may not be such a bad thing) as the current chiefs create a sustainable and compliant business model with steady growth and a desirable asset. Lending Club may have lost money recently, but of the xx dollars the company reported as lost in 2016, xx dollars were due to ‘stock issuances’. The underlying asset, unsecured consumer loans, has remained decently strong, and (depending on the investor’s risk tolerance) has remained positive throughout 2016.

There are not many new investors are going to become rich betting on Lending Club stock in the near future. Its days of exponential growth are over; but I do expect Lending Club to grow in the coming years. They will continue to tighten down their underwriting, gain the trust of institutions, automate as much of the loan underwriting process as possible, and integrate with industry incumbents. As Lending Club’s current CEO has recently said, international expansion is a matter of “when, not if.” I expect Lending Club to expand internationally in three to five years (my bet would be Brazil, but thats another article).

Uber, on the other hand, must remain splashy and aggressive in order to increase their brand awareness and grow their valuation. They still want to break the old method of travel and the old oligarchies. And until (if?) they go public and are held accountable by investors other than their VCs, expect for them to maintain their aggressive posture, and continue to shoot for the moon.