What to expect in Lending Club’s 3q Earnings Report

This model worked well for Lending Club, and for the majority of company’s history the company was in a race to find borrowers while the supply of investable cash outstripped the supply of borrowers. Lending Club grew at a nearly exponential rate from 2007 through the first quarter of 2016.

Then the platform, and the industry it represents, had a hiccup. And like hiccups sometimes happen, multiple things went wrong at almost the same time. Leadership within the company changed, regulators refocused their attention on the industry, yields started dropping, and originations fell as some major institutional investors either withdrew their money or halted reinvestment. Unsurprisingly then, revenue fell and the company posted substantial losses in the second quarter.

There are signs that the company is getting back on its feet as it deals with the issues one at a time. Leadership has stabilized as Lending Club has brought on experienced executives for top positions. Regulators have remained mostly silent. The company has tightened underwriting and eliminated nearly 11% of potential high-risk borrowers from its credit policy. And the company has announced a new product line, auto loan refinancing, hoping to get a piece of a \$1T market.

Lending Club was not alone in its second quarter troubles. Some of the largest lending platforms, Ondeck and Prosper Marketplace, posted losses in the 2q 2016 of -\$18M and -\$35M, respectively. Circleback, one of the first Origination Platforms to securitize loans in the US, is facing a substantial drop in originations, is reportedly getting out of the lending game altogether. Despite these industry setbacks, a notable entrant into the Online Lending space is Marcus from Goldman Sachs.

Marcus is positioning itself as a direct competitor to Lending Club’s consumer loan business, by offering unsecured consumer loans from \$3,500 to \$30,000. Goldman Sachs took a hard look at Lending Club’s business model, identified borrower pain points, and worked to address them. The platform removed late fees, origination fees, and added flexibility to the monthly payment schedule. Since Marcus is a balance sheet lender, there are no pesky investors to deal with.

But does this move, the creation of an online lending platform targeting low-value high-volume unsecured consumer loans, make sense for Goldman Sachs? The average loan originated through the existing online marketplaces is about \$15,000 and earns approximately \$1800 in revenue over a period of three years. This is a far cry from the luxury investment bank’s usual high-end high-margin deals. Marcus is now in invite-only beta mode, time will tell if it will be profitable and competitive with the existing players.

An update from the second quarter

Announced this past Tuesday, Lending Club is adding automobile loan refinancing to its portfolio of loan offerings. While the new vertical is getting off the ground, the company will be putting its massive cash reserves to work by funding these loans themselves. If the trial run in California goes well and the demand for refinancing auto loans is high, the company will be signing up institutional money to take over the credit risk.

In a previous article , we noted that Lending Club had several chores ahead of them in order to win back investor confidence.

Three months later, here is an update to how Lending Club has handled these issues.

In this department, no news (from the Feds) is good news.

The bad news is that dealing with this threat has been costly. The company spent about \$15M in the second quarter on an “increase in legal, audit, communications, and advisory fees,” and this spend is expected to continue into the third quarter and fourth quarters

A key competitive advantage of the Online Lending model is the ability to have lower overhead costs. Lower overhead costs mean lower rates for borrowers, and higher returns for lenders. The Lending Platform must be able to adapt to changing times, scaling operations to match the market sentiment. As the company is in a period of contraction, in order to be profitable it must contract expenses to align with revenue projections.

There are two ways to lower company expenses. The first is to decrease variable costs, which in Lending Club’s case is mostly marketing costs, and the second is to lower fixed costs, which takes longer and is mostly accomplished by cutting headcount.

Lending Club announced that they eliminated 179 employees near the end of 2q. The company would be realizing \$2.6M in severance costs in the third quarter, or roughly \$14,000 per employee. This severance is concentrated in Origination/Servicing.

Based on these numbers, it seems that Lending Club’s \$30M (\$20M adjusted) in expenditures for Engineering and Product Development is unlikely to decrease in the near future, and will continue to be a major hit against margins moving forward.

Sales and Marketing expenditures decreased 25% from 1q to 2q. This is the area with the largest variable spending, which is the easiest to turn up and down with lender demand for notes.

As mentioned above, G&A expenditures are likely to remain elevated until the end of the year due to the increase in audit and legal expenses.

On the plus side, Lending Club had made key hires at top positions inside the company, as Thomas Casey, an experienced executive at top companies, took over the helm as CFO.

Unfortunately, one of Lending Club’s investment funds posted the first loss in its history in August. While this is partly due in part to changes in methodology to asset valuation, it is also indicative of the lower borrower requirements the company introduced in 2014. Cumulative default rates have risen each year since 2013. 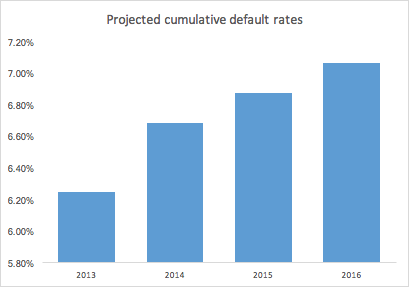 The company did take steps to eliminate the series of the ‘underperforming loan segment’ three times this year, twice in the first quarter of 2016 that eliminated 10% of borrowers, and once in the past month that eliminated another 1% of borrowers from its credit policy. In dollar terms, this recent cut will eliminate approximately \$70M in annual originations, or about \$2.5M of potential annual revenue.

But due to the nature of lending, changes to the credit policy will only be fully reflected in returns after the vintages containing the loan segment either mature or are charged off. This can take up to five years, meaning the last remnants of the old credit policy will be gone in the third quarter of 2021. The fact that these vintages will be contained in Lending Club’s funds for the next several years may discourage additional accredited investors from joining those funds. Requested redemptions for the fund in the second quarter were listed as $442 million, which, when redeemed, will translate into a \$1.3 million quarterly drop in revenue for the fund. Redemptions requests in the fund also mean that the fund is unable to reinvest principal and interest payments back into new notes, which will hurt originations.

This number may be optimistic.

A look at retail note origination 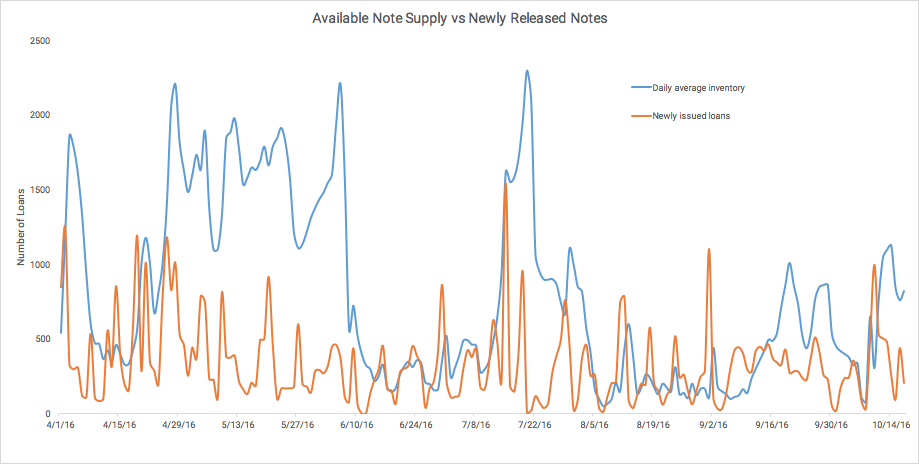 Lending Club also issued \$14 million in incentives to investors in the second quarter, which was recognized as contra revenue. These incentives continued into August, which means that we can expect to see some contra revenue realized in the third quarter. 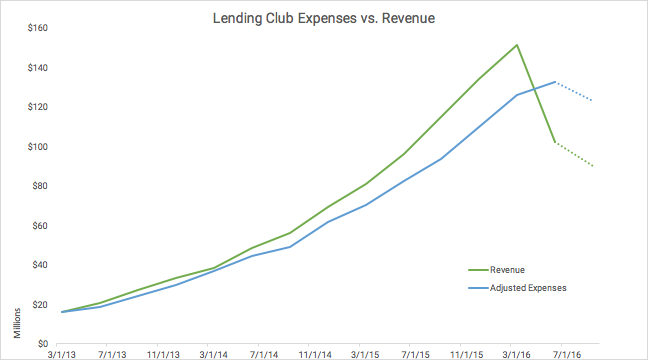 As noted above, if Lending Club did a good job of broadly slashing the sales/marketing budget, which was by far is its largest cost center, we would expect to see the adjusted loss to be closer to \$25M. If the company was not able to cut very deep, we would expect losses to be closer to \$45M. The likelihood is somewhere in the middle, with an adjusted loss of \$30-35M, or a loss of (\$0.077) to (\$0.09) per share.

On the ‘nonperforming loan’ segment

It is difficult to see if banks or other originators are experiencing an increase in defaults for the same segments of the loan population, since data for the unsecured consumer installment loan industry is mostly opaque.
Would these borrowers receive loan terms at all at any other lender?
Are the increased defaults at Circleback, Loandepot, Ondeck, and Lending Club only indicative of inexperienced underwriting, or does it represent an economic signal that the credit cycle is starting to worsen among the most vulnerable?

On the Marketplace Lending industry

The Marketplace Lending business has developed past its tinkerer phase, and is evolving from initial adopters to mainstream. But the main adopters are institutions, rather than individuals. We don’t know if anyone has pointed out the irony in a bank using an online platform to originate loans yet, but the financial revolution for the masses has failed to materialize. Instead of revolutionizing finance into something new, the old guard has taken over online lending and is adapting it to the existing system.

Lending Club began as a way for consumers to obtain non-secured loans. The auto loan refinancing business represents a move into secured assets and puts further distance between Lending Club and the retail investors it once relied upon. The company noted that most auto dealers place a 1-3% surcharge on top of the loan that is backed by the bank, and the competitive advantage of the auto loan refinancing is that the company will be able to offer lower rates by cutting out the middleman.
In their statement, we noted that loan servicing is outsourced. With no ordination fee charged to borrowers, and no servicing fee charged to lenders, it is unlikely we will see these loans on either the whole loan market or the fractional market.  Either Lending Club will remain a balance sheet lender, or it will securitize the loans and sell them in batches to institutional investors.

On the future of Lending Club

Jaidev Jaradana, CEO of Zopa (Disclosure: Runa Capital is an investor in both Zopa and LendingRobot), pointed out recently that the Marketplace Lending industry is obsessed with growing origination numbers. He stated that Zopa has become profitable by optimizing the business for sustainability rather than for growth.

Many pundits believe that this credit cycle will be winding down in the near future. Of course, this winding down has been prophesied since 2011, and as yet has failed to materialize. But the question remains, in what position will Lending Club be when this credit cycle ends? Still struggling to grow originations in the midst of economic headwinds, or with streamlined business model able to make a profit in a downturn?

It is important to note that Lending Club still has enough cash and cash equivalents on hand to follow either path.

What We’re looking for in the next earnings release:

1) Results from the necessary corrective actions. Scott Sandborn has been in place since May. We want to see further evidence that he is taking charge and righting the ship.

2) A clear path forward. Will Lending Club assume rapid origination growth in 2017, or will it look to balance its revenue and expenses?

3) A hint at something new. The auto refinance deal is mildly interesting, but lacks the ‘wow’ that we would expect from a silicon valley tech company. In order to maintain leadership in the online lending space, Lending Club needs something to reignite the public’s imagination.

The timing of Lending Club’s earnings release (on 11/7, a Monday, at 5 am PT) is interesting, and makes us think that the company expects the market to act positively to some sort of announcement. Alternatively, the timing could represent bad news; the only other early morning Monday earnings release was during 1q 2016, when Laplanche’s resignation was announced. Either way, the timing of the release is potentially noteworthy.